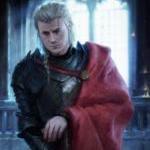 A Game of Thrones: The Card Game Second Edition